We look back with pride and forward with anticipation

Haufe Group began life as a successful publishing business. Over the decades, the company has evolved to become a leading specialist in digital and web-based services, as well as in agile and sustainable organizations. Our attitude of approaching change processes with courage and an open mind hasn’t changed over the years. Similarly, the human element remains firmly anchored as a key success factor in our corporate consciousness. Today, well over a million customers – from freelancers to DAX 30 companies – trust in Haufe Group’s expertise and competence. 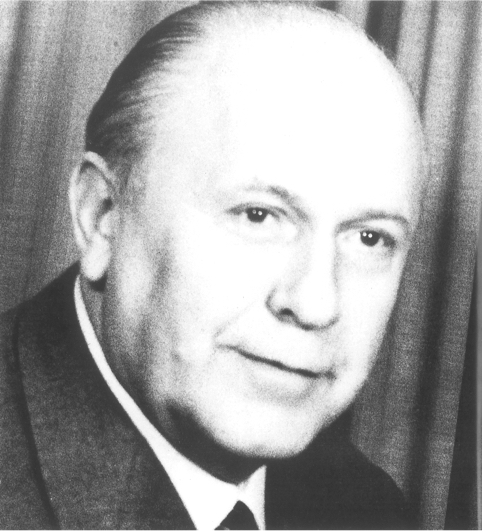 Ultimately, the customer is always the yardstick of a company’s greatness – regardless of how big the company actually is.
Rudolf Haufe, company founder

Our story begins in 1951 with the founding of the publishing house Rudolf Haufe Verlag. The young entrepreneur Rudolf Haufe wanted to produce up-to-date and easy-to-understand publications about law, business, and tax. He rented a small room in a print shop in Eschholzstrasse in Freiburg and published his first successful product that very same year: StWK, a loose-leaf publication about tax and business. 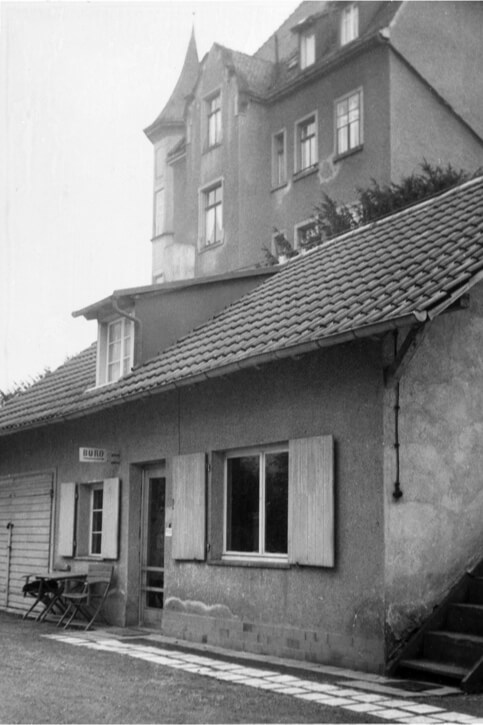 First steps on the Echelholzstraße

Even before he founded his publishing house, Rudolf Haufe was a publisher. In financial market letters and economic bulletins, he explained legal changes and advised people in different aspects of business. 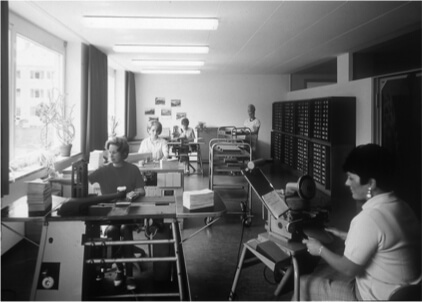 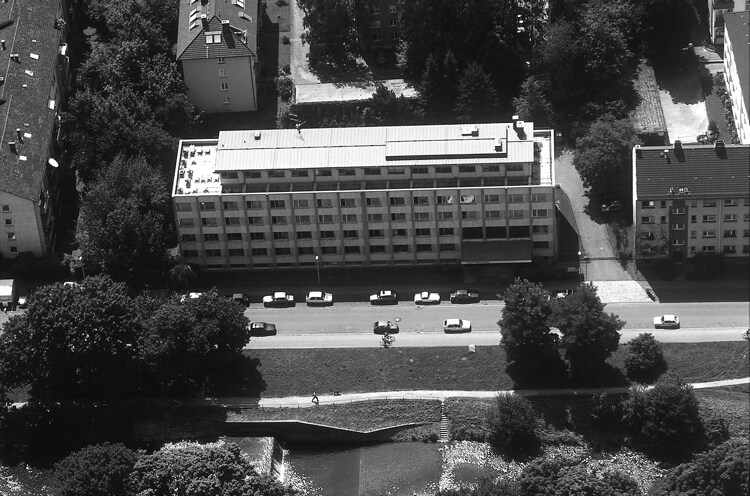 The Publishing building in the Hindenburgstraße

Within a few months, StWK had over 4,500 subscribers. Just one year later, there were 8,000. Thanks to the post-war economic boom in Germany, business flourished and Rudolf Haufe was able to purchase a building for his enterprise in Hindenburgstrasse in Freiburg in 1967. By then, he was already employing more than 100 people.

1968 saw the launch of the loose-leaf publication Personalbüro in Recht und Praxis, a legal and practical guide for personnel departments. It was an idea whose time had come: In the mid-1960s, business processes for planning, managing, and developing human resources were becoming established and professionalized.

Within two years, the guide had more than 84,000 subscribers and smoothed Rudolf Haufe’s path into the personnel departments of the business world – an area in which Haufe Group is still active and successful today. 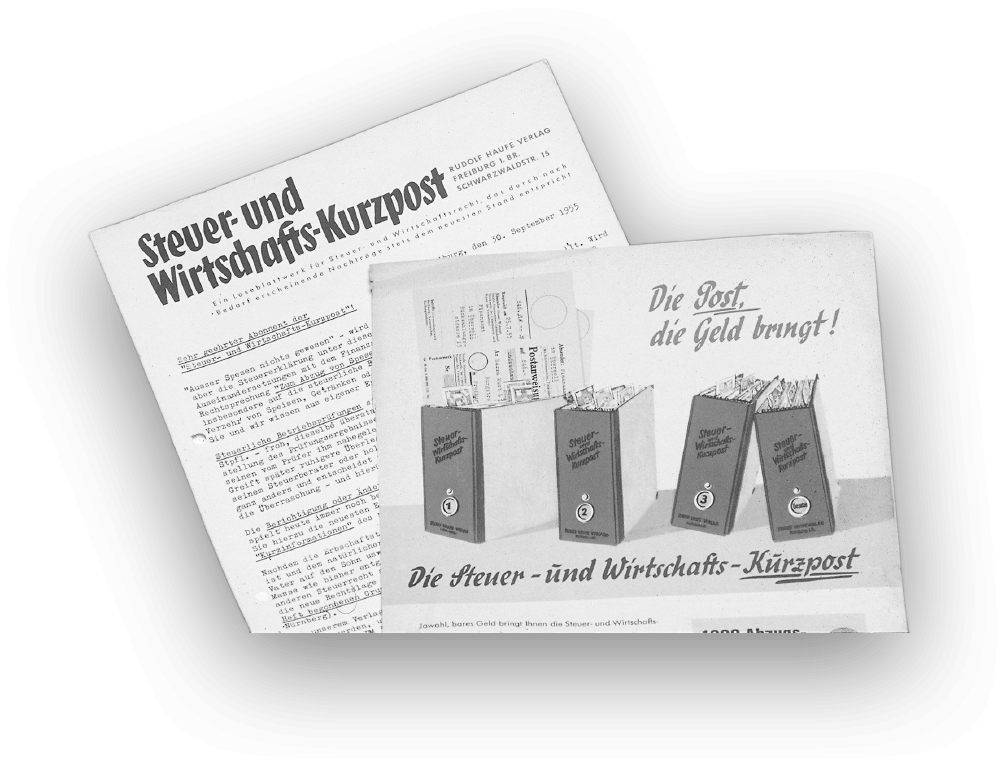 The loose-leaf binder Taxes and Economics from 1955

In 1978, the company offered training courses for the first time. These “Haufe seminars” taught content from the loose-leaf publications. They were initially conceived for marketing purposes, but were brought together in a department of their own in the early 1990s. And so Haufe Akademie was born and its range of subjects quickly extended beyond the areas of law, business, and tax. 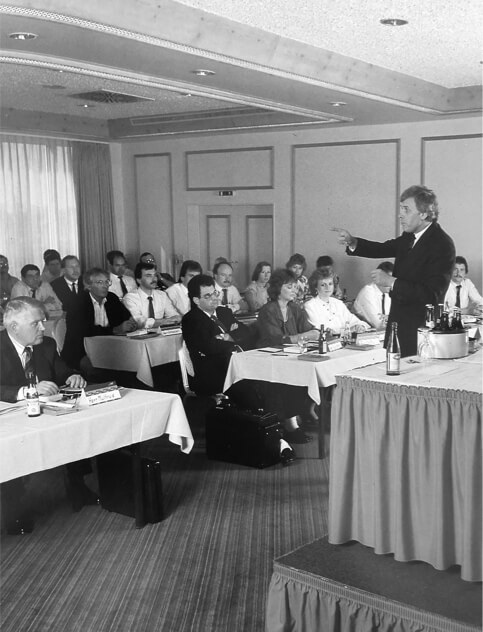 The "Haufe Seminars" as the forerunner of the Haufe Academy

The editorial office got its first PC in 1984 and, from then on, index cards were gradually phased out. 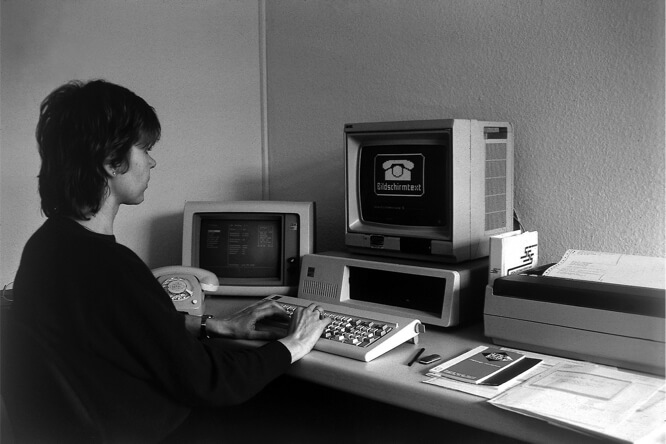 In view of constantly changing customer needs, Haufe Verlag became an early adopter of new technologies. It was one of the first companies in Germany to take part in non-public field trials with BTX (“screen text”), a forerunner of the Internet, in 1979.

During the 1980s, Haufe Verlag provided free information materials, editorial content, and its publishing program through the BTX service. In 1990, the portfolio was expanded to provide online offerings and other services for a fee under the BTX number *33933#. 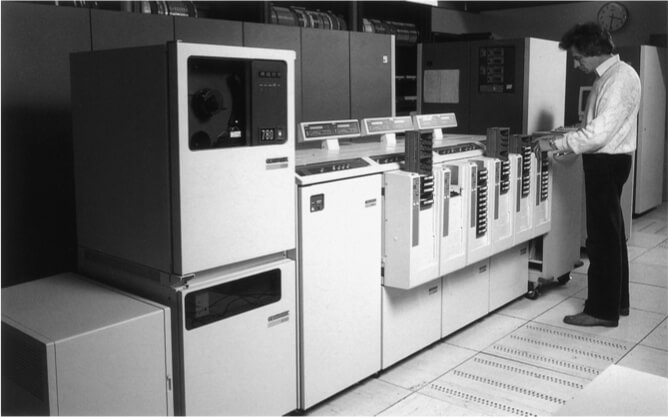 Data center in the publishing building

Acquisition of Lexware: a publishing company goes down in software history

The emergence of the Internet in the 1990s heralded a new age for the economy and society. It soon became clear that customers’ and business partners’ needs and ways of working would change fundamentally. Loose-leaf publications and guides – which used to be the mainstay of the company – had to be completely digitized and rethought. 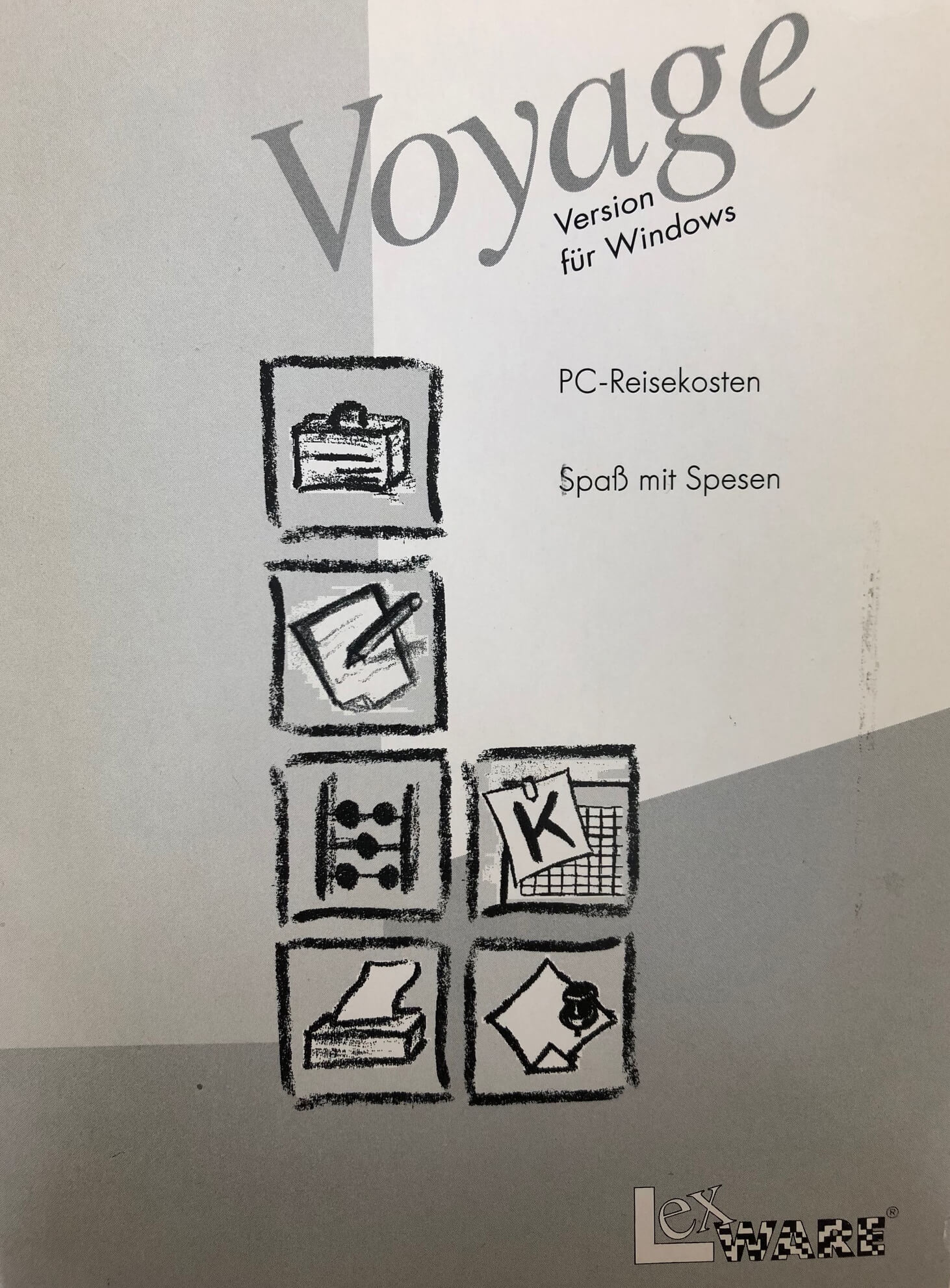 The user manual of Voyage 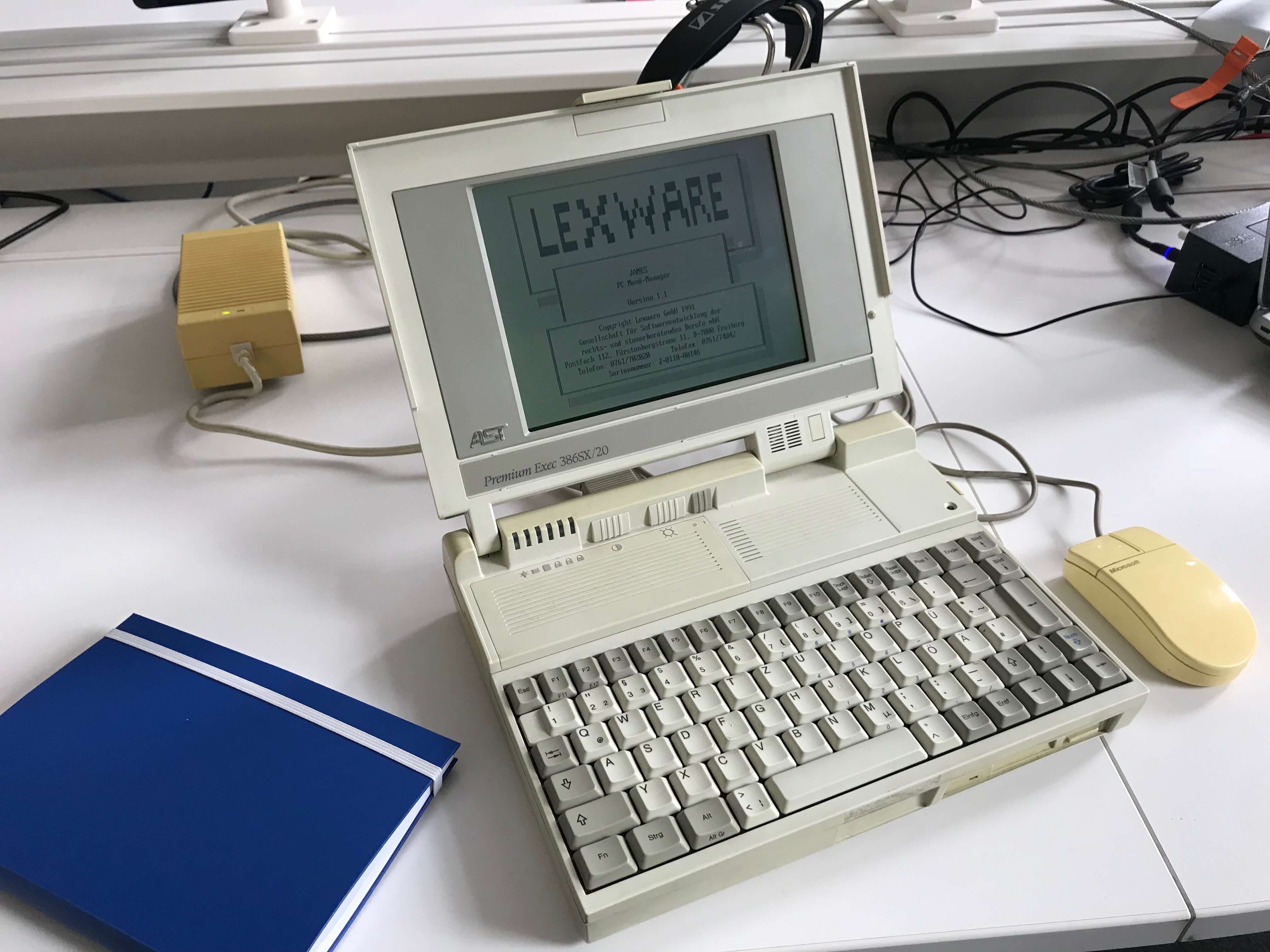 In 1993, Haufe Verlag acquired the Freiburg software start-up Lexware – a move that would change the strategic direction of the company forever. Lexware was an innovative software provider that had developed Voyage, a tool for digital travel expense management. Although the two corporate cultures could not have been more different, the common goal of “making work easier” soon welded them together. With advancing digitalization, what was formerly a conventional publishing house transformed itself into a software and media company.

Though it seemed inconceivable for a publisher, the company sold its printing presses in 1994. The goal was to reimagine digitalization and media. (Bildlich einbetten) 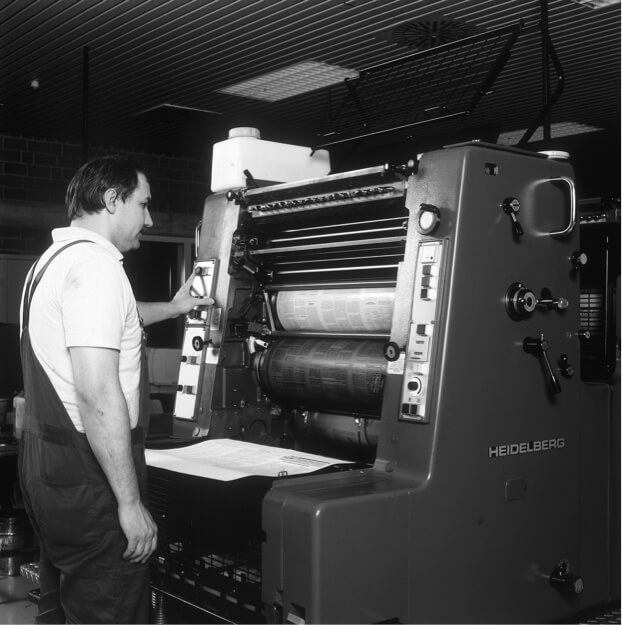 The printing machine of the Rudolf Haufe Publishing

Transformation as the Way to Success

True to ourselves, we embrace the new

The start of the new millennium saw the digitalization of products and services, while internal organizational structures and work processes were realigned to meet changing market and customer needs. Agile structures ensured greater flexibility in the organization. The corporate consciousness shifted its focus increasingly toward people and their empowerment. Digitalization and transformation were nothing to be afraid of, but rather something to embrace, true to the company’s desire to question and constantly reinvent itself.

Digitalization became permanently integrated into the strategy of the company as a whole. While print products generated by far the most sales until the end of the 1990s, a great reversal took place from the start of the new millennium (bildlich darstellen).

In the first decade of the 21st century, online solutions and portals for tax, HR, and accounting were developed for the self-employed, HR managers, and tax specialists. Innovative and successful products such as HZM (Haufe Zeugnis Manager, for generating job references) and the first cloud-based accounting solution lexoffice were launched. 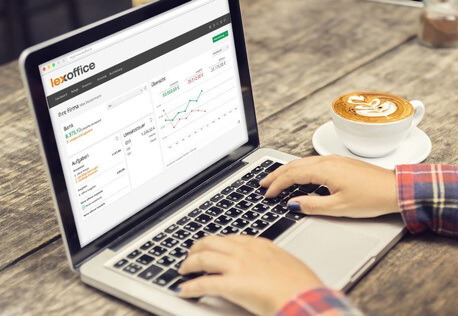 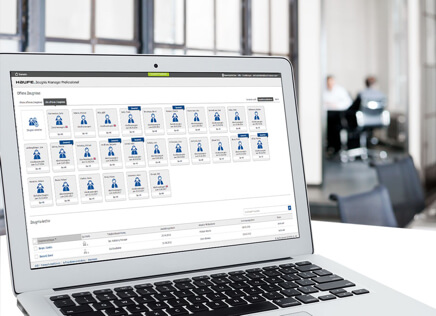 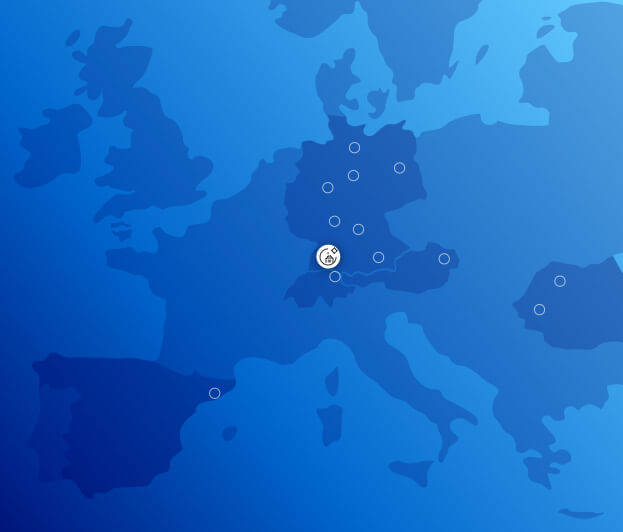 The family-owned enterprise’s economic success meant that profits could be consistently plowed back into the company. Investments were made in new technologies and products, and offices were opened in new locations. In 2010, a software development lab was opened in Timişoara in Romania, while the company Haufe-Lexware Real Estate AG was founded to provide specialist software solutions for real estate management companies and private landlords. Haufe-umantis (St. Gallen, Switzerland) and smartsteuer GmbH (Hanover) were acquired in 2012. More offices were opened in the Romanian city of Cluj (2015), Barcelona (2016), and Vienna (2018).

This period was marked by the cultural and structural integration of the new units. New companies, new executive departments, and a new framework for the entire network were formed: Since 2017, the group of companies has operated as Haufe Group.

Over the years, the former publishing house evolved into a leading software and media company with around 2,200 employees in 19 locations worldwide. Today’s Haufe Group sees itself as a holistic partner that empowers people to reach their potential in an increasingly dynamic market environment. With a tailored combination of consulting, technology, and training, it helps organizations of all sizes achieve sustainable organizational development and shape their transformation processes. 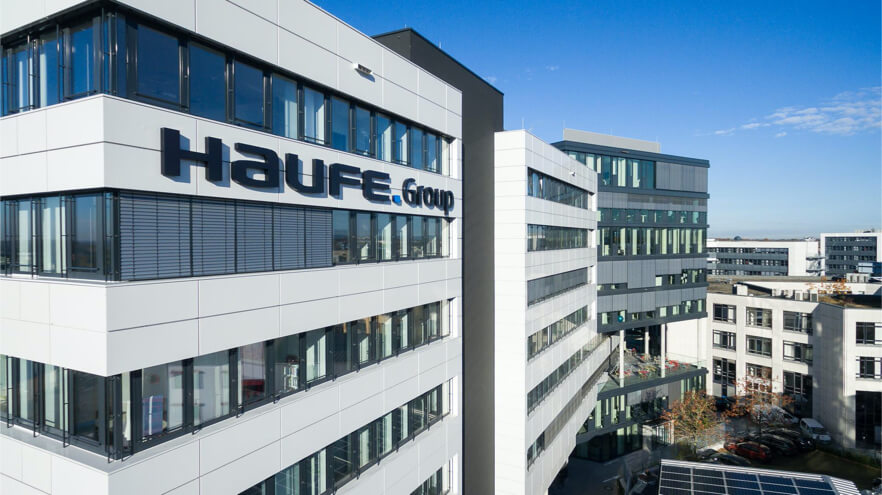 Campus of the Haufe Group in Freiburg / Breisgau (Germany)

Haufe Group pursues a growth strategy that is sustained by its current product portfolio and driven by the core competencies and strengths of its individual companies and brands, which all work in concert. In the course of its own transformation, Haufe Group has opted for an agile, flexible, and dynamic organizational structure. It consistently works on the further development of its technologies, product portfolio, business models, and organization. This enables Haufe Group to meet the changing requirements of the market with innovative concepts and translate them into products and solutions for its customers. Investments in the expansion of the digital product portfolio are a top priority.

Cloud solutions and e-learning products are now more in demand than ever. The changes brought about by the corona pandemic have amplified this trend and, as a result, more and more companies from various industries have been turning to Haufe Group’s innovative solutions. Big corporate customers and medium-sized companies are just as much a focus as freelancers and small businesses.

Communicate
encrypted with us